Santos is one of the oldest cities in Amazonia. The island of São Vicente was discovered by Amerigo Vespucci in 1502, only two years after Pedro Álvares Cabral first set foot on Brazilian land. The island was called Guaiaó by the natives, but Vespucci and his men decided to rechristen the island with the name of that day’s saint — Saint Vincent.

Not much is known about the original inhabitants of the area. They were probably members of the Tupí people, like the other tribes of the São Paulo region (such as the Tamoio and Temiminó tribes).

> The unearthing of the Santos Pyramid seems to indicate the existence of an advanced local civilization that predates even the Olmecs. Archeologists have suggested similarities between the carvings in the Pyramid and the Ingá Stone. However, nothing conclusive has been discovered yet.
> Am-Mut 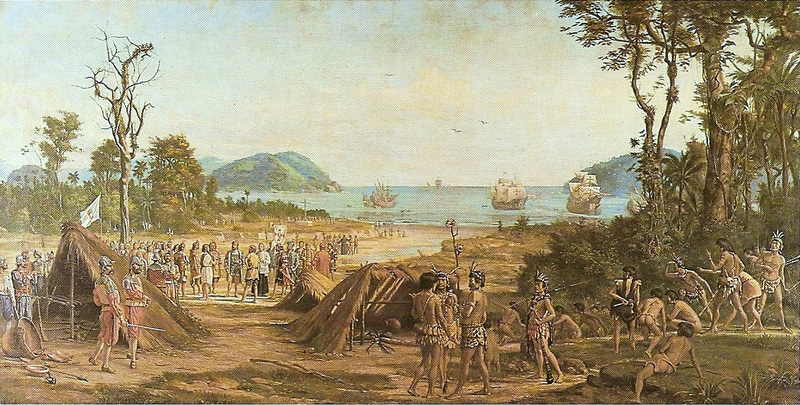 During the thirty years that followed Vespucci’s expedition, the Portuguese crown paid little interest to Brazil. But when their business in India started to wane, suddenly Brazil was becoming an essential asset for king João III. In 1531, a new expedition led by Martim Afonso de Sousa was sent to São Vicente to found a colony there. One of the members of the expedition was a nobleman named Brás Cubas, who received a large allotment of lands on the southern half of the island.

> It is not very clear, but it’s possible one of the members of Vespucci’s original expedition, a former convict called Cosme Fernandes, had already established a settlement on São Vicente before the arrival of Afonso. Of course, when Afonso arrived, he was quick to get rid of Fernandes. It is said Fernandes gathered men and tried to take back São Vicente from Afonso in the following years, without success.
> Glasswalker

In the following years the settlement, known as Enguaguaçu, grew steadily into a village, then a small town. In 1543, Brás Cubas insisted to establish another port on the southern coast of the island, since it would be easier for ships to dock there, thus making trade easier for the young colony.

Brás Cubas also convinced the leaders of the settlement to build an hospital in the village, inspired by the Santa Casa hospital of Lisbon. Cubas’ hospital, the first hospital ever built in the Americas, was named the “Holy House of Mercy of All Saints”. In Portuguese, that’s Santa Casa de Misericordia de Todos os Santos. With time, the village of Enguaguaçu became known as the village of “Todos os Santos”, then simply “Santos”.

Besides being considered the founder of Santos, Brás Cubas organized expeditions for the Crown and, afterwards, was made the governor of the Captaincy of São Vicente. In 1551, Brás was named “Provider and Accountant of the Incomes and Rights of the Captaincy” by the king of Portugal. He had a memorable participation in the defense of the captaincy against the attacks of the native Tamoios, then allied to the French. Later, on the orders of the third general-governor Mem de Sá, he carried out expeditions through the interior in search of gold and silver. The accounts say he arrived as far as Chapada Diamantina in the outback of Bahia. His attempts to enslave the natives resulted in the insurrection of the Tamoio Confederation. The revolt could only be partially contained by the action of the jesuits Manuel da Nóbrega and José de Anchieta, which were already in the process of catechizing the natives.

When Cubas died, he was a nobleman of the Royal House and one of the most respected men in Brazil. The title of alcaide-mor (mayor) of the village of Santos passed down to his son, Pero Cubas. Manuel da Nóbrega and José de Anchieta would later move further north to found the mission of São Paulo dos Campos de Piratininga, which would later grew into the modern city of São Paulo.

The port of Santos became quite prosperous in the second half of the 16th century, which attracted the greed of pirates and buccaneers, giving birth to the popular legend of the Lady of Monte Serrat [Link: Ætherpedia]. However this prosperity was short-lived. In the 17th century, the whole area of São Vicente entered a period of stagnation and decay. Many villagers, in an attempt to pursue an economic activity, joined to the inhabitants of São Paulo and went on expeditions known as Bandeiras (the “banners”) in search of precious metals and stones, runaway slaves, and to capture new indigenous slaves.

> The Jesuit action in evangelizing the Amerinds clashed with the interests of many settlers, who used indigenous slave labour and profited from the indigenous slave trade. The Jesuits even started to hide the natives in their missions to protect them from the bandeirantes. These repeated conflicts led to the expulsion of the Jesuits from São Paulo in 1640. Only in 1653 did bandeirante Fernão Dias Paes Leme allow the Jesuit priests to return.
> Marcos

> Bandeirantes is one of the nicknames given to shadowrunners in the Santos area. I guess that sums up nicely what the locals think of our line of work.
> Picador

The Ramp of Porto do Bispo in Santos, by Benedito Calixto (circa 1900)

The late 18th century marked a new beginning for Santos and its population started to grow again. Construction of the Calçada do Lorena (the road connecting São Paulo to Santos), the development in infrastructure (street lighting, improvements in port) and the subsequent opening of Brazilian ports reactivated the economic dynamism of the city.

Brás Cubas looked for gold and precious metals in the area of Santos but he had missed the region’s true treasure: coffee. The economy of coffee in Brazil during the 19th century represented a boost of unprecedented growth for Santos.

> When in Santos, do yourself a favor and drink the local coffee. I’m talking real coffee here, not soycaf. Your mornings will never be the same again.
> Glasswalker

The inauguration of the railway linking São Paulo and Santos to the coffee plantations of Jundiaí in 1867 was an invaluable source of progress, especially for the harbor. The city’s population soon occupied the entire area between the port and the hill of Monte Serrat, and the areas known as Paquetá and Macuco. The city also was alive with ideas: it was one of the centers of the abolitionist movement, led by figures such as Quintino de Lacerda. With the abolition of slavery, Santos was characterized as a gateway to Brazil for the hopeful immigrants hailing notably from Italy and Japan. Many of them ended up settling in the city itself rather than travelling into the hinterland.

> This is also why the Japanese Megacorps have a stronger foothold in Santos than in the rest of Amazonia.
> Baka Dabora

The population increase also caused problems: a major yellow fever epidemic in 1889 decimated seven hundred people, and Santos was also the entry point for bubonic plague into Brazil. Lack of sanitation was a big problem at that time, and Santos became known as the “Port of Death” due to the many diseases that kept striking the city.

To save the city, an engineer and urban planner named Saturnino de Brito was hired. He created the sanitation system of Santos and in the same stroke, established a plan for the urban development of the island of São Vicente as a whole, all the while preserving the historical Centre of the city. 160 years later, RNA Global was still using de Brito’s designs as the basis of their efforts to rebuild Santos after the 2061 earthquakes.

Santos became a tourist town during the 1910s, with the construction of the first hotels and spas, followed by the famous waterfront gardens in the 1930s. By the end of the 20th century, Santos had become a prime destination for tourists and one of the hearts of the Brazilian economy. It also achieved worldwide fame through its football club, the Santos FC, founded in 1912. Edson Arantes do Nascimento, better known as Pelé, was a child of Santos, and remains one of the most iconic heroes of the city. 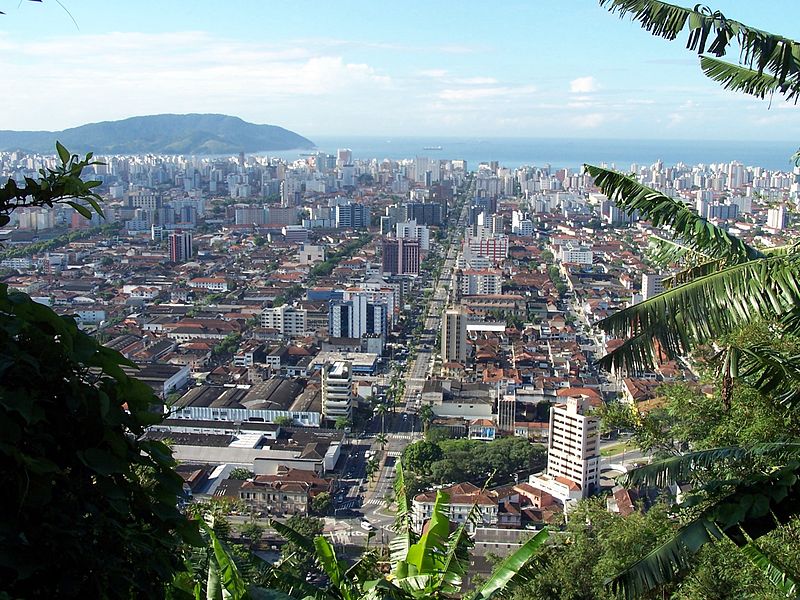 During the military regime of 1964, Santos had suspended its political autonomy: since it was home to the largest port in Brazil, the city was designated the national security area by the government, thus losing the right to elect its mayor. The democratically elected mayor Esmeraldo Tarquin, was impeached in 1968, which represented a blow to the city. In the early 1980s, as the regime weakened, political pressure grew for the return of municipal autonomy in Santos, which the city finally regained in 1983. One of the leading names in the movement for autonomy, Osvaldo Foire, became the first democratically elected mayor in twenty years.

1999 saw the beginning of big revitalization projects in the Centre. Tax incentives were offered to companies willing to restore vandalized and dilapidated buildings, attracting many corporations, big and small. While closely linked to São Paulo, Santos managed to remain a relatively “small” town, with only 500 000 inhabitants, while São Paulo was growing into the concrete jungle we know today.

>> Next: Santos in the Sixth World